How many Kurds, Sunnis and Alevis live in Turkey?

Discussions on what the Kurdish population in Turkey is have resumed in international media in the wake of the Syria debate. The Turkish Statistical Institute (TUIK) has not yet published any official numbers on that.
But the November 2019 “Gender in Turkey” report by KONDA research company based on the data from its 2018 Lifestyles Survey contains some interesting information on the ethnic identity, or belonging, of the people living in Turkey alone.
First of all, it needs to be stated that the Kurdish population in Turkey, different then Kurds in neighbouring Iran, Iraq and Syria, do not live in all together in a single area and do not marry Kurds exclusively. The city with the highest Kurdish population is not Erbil or Diyarbakır but Istanbul. The 2011 report by KONDA titled “Perceptions and Expectations Regarding the Kurdish Issue”, Turkish-Kurdish mixed marriages constitute approximately a portion of 3.5 million of the whole of Turkey’s population.

Belonging is the right question to ask

That’s why, the researchers at KONDA, supervised by Bekir Ağırdır, have asked 5793 people in 36 provinces, 291 districts and 951 neighbourhoods the same question: “what do you think or feel your identity is?”.
The answer was “Kurdish” by 16 per cent among both men and women. As the population of Turkey is a little above 82 million by the end of 2018 according to TUIK, it can be estimated that more than 13 million people in Turkey identify themselves as Kurds.
76 per cent of women and 77 per cent of men responded to the same question by saying they identified as “Turk”. This leads us to a little over 62 million people with the same ethnic identification. Meanwhile, 3 per cent identify as Arabic (around 2.5 million), and about 2 per cent as Zaza (around 1.5 million). Those who identified with other ethnicities amounted to 3 per cent, so about 2.5 million as well.
The participants of the KONDA survey were also asked: “what is your religion, and your sect?”

In those who identified themselves as Sunni-Hanafi, there was a difference between men and women; 71 per cent of men and 74 per cent of women reported belonging to the “Sunni and Hanafi” branch of Islam. On average, it makes 60 million out of 82 million people. 13 percent of men and women identified themselves as Sunni-Shafi; that means close to 11 million.
The percentage of those who call themselves Alevi is 5 per cent among women and men both; meaning that the Alevi population by the end of 2018 was slightly over 4 million.
There is also a certain 4 per cent of the population which KONDA reports to be “other Muslims”, including those belonging to the Shiite-Jafari sect.
Non-Muslims are about 1 per cent…
There is an interesting finding in KONDA’s research and that is the rise in the number of non-believers: 4 per cent of men and 2 per cent of women have declared themselves to be in this category. KONDA comments that this could explain the decline in the proportion of men who declared Sunni-Hanafi belonging.
Under President Tayyip Erdoğan’s Justice and Development Party (AKP), Turkey has been experiencing the most pious governments ever with a dominant Sunni-Hanafi tone since 2002. The rise in those who declare to be non-believers, since 2008 according to KONDA, is worthy of being investigated by sociologists and political scientists. 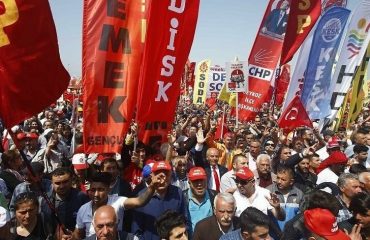