A different story on Biden’s remarks on Erdoğan 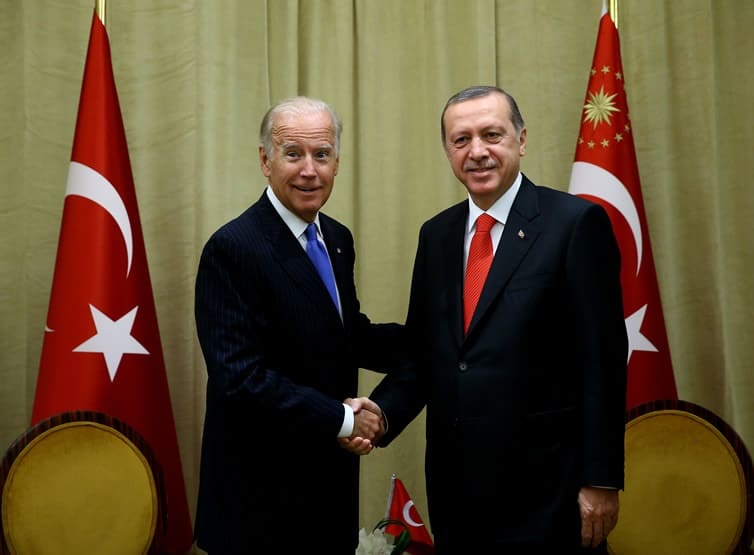 Journalists asked Joe Biden, the Democratic presidential candidate to challenge Donald Trump on Nov. 3, about Turkey. Below is briefly what he said:
– We must support the leaders of the opposition against Erdoğan. We can embolden them to be able to take on and defeat Erdoğan. Not by a coup, but by the electoral process.
– Making it clear that we are in a position where we have a way which was working for a while to integrate the Kurdish population who wanted to participate in the process in their parliament.
– He has to pay a price. He has to pay a price for whether or not we’re going to continue to sell certain weapons to him. In fact, if he has the air defense system that they’re flying F-15s through to see how they can try to figure out how to do it. (On the purchase of Russian S-400 missile defense system)
– At the end of the day, Turkey doesn’t want to have to rely on Russia.
If Biden becomes the U.S. president with such poor knowledge on Turkey, the relations between the two countries will be worse than the Trump era.
But wait for a second… When did Biden say all these? At a meeting he attended on Dec. 16, 2019, while he was running to be a candidate. When was it published? On Jan. 17, 2020, in the New York Times.
Then, any reactions from President Tayyip Erdoğan’s government at the time? No. Well, did Erdoğan know about Biden’s statement? Yes. Who informed him? As far as I learned, it did not come from the Foreign Ministry channels but presented to him in a routine informative note by Fahrettin Altun, the Communications Director of the Turkish Presidency of Communications.

To be continued, but first Biden

Biden’s answers in a two-minute portion by the end of the two-hour interview are full of material errors and prejudices.
Without mentioning these, it would not be appropriate to direct questions to Ankara.
Let’s start from the last one:
– Only Turkey but also the United States would not want Turkey to rely on Russia, this would shake the basis of the United States’ all European security and the Balkans, Middle East, Mediterranean Sea and Iran policy.
-The model of the fighter jets, which usurped despite international agreements, is not F-15 but F-35, a project that Turkey also contributes as a joint producer. Someone better tell this to the U.S. presidential candidate.
– The Kurdish-issue focused HDP is the third-largest party in Turkish Parliament. In addition, there are Kurds in almost all political parties. Biden should also be informed about this.
-Receiving support from the United States or any other country against the government is such a low that no parties in Turkey would like to see. Biden should know that such discourse would only strengthen Erdoğan.
Also, it is still in mind that the U.S. supported the 1960, 1971 and 1980 military coups in Turkey for the sake of protecting its interests against Moscow. Fethullah Gülen, who is accused of managing the July 15, 2016 coup attempt in Turkey,  continues living in Pennsylvania without facing any probes.

The news stirred politics, starting late on Aug. 15. Both the government and the opposition reacted strongly. The opposition also started asking two additional questions, especially on 16 August.
1- Why was the government reacting now, some seven months after they were published? Despite the fact that Anadolu Agency published a commentary in English on these remarks on May 29.
2- Had Biden decided to support Erdogan? Because even small kids in Turkey know that criticism by a U.S. politician would only strengthen Erdoğan.
And how, why and by whom was this news re-circulated after so many months?
The news was first published on the Twitter account of Iraqi Kurdish journalist Arif Zêrevan, with that exact section being cut and prepared for publication. Zêrevan is a journalist who is extremely close to the Kurdistan Democratic Party (leader) Massoud Barzani. In this context, for example, he is against both the outlawed PKK, and the Turkey’s military presence in Iraq. He also has close links with the Syrian Kurds.

Who reheated and spread the news ?

There are a conspiracy theory and two possible scenarios for this news to come from Zêrevan.
Although I don’t think it is relevant, the conspiracy theory is based on a report published in Ahval. Accordingly, the video was previously broadcast in the “Arab media” on Aug. 13, the day Israel and the United Arab Emirates (UAE) signed an agreement. This inevitably brings to mind that the UAE recently appears behind every obstacle against Turkey. This news would also be a new problem between Turkey and the U.S. However, I could not find such news in the Arab media, which might be due to the fact that unfortunately, I do not speak   Arabic, but when I asked Arab colleagues, they also said that they first learned about it from Ahval’s Arabic desk and Arif Zêrvan.
The conspiracy theory basically claims that the video was circulated by one of the countries that want to introduce a new element of mistrust in Turkey-U.S. relations.

Joe Biden’s brother, Jim Biden, came to Istanbul with his Lebanese business partner Amer Ruston in spring in 2019. He basically attended meals arranged with names close to the ruling Justice and Development Party (AKP) and business circles, and sought partnerships in some construction projects in the U.S. Receiving foreign aid for election campaigns is considered a serious crime under U.S. law. However, during these contacts, Jim Biden constantly talked to his brother Joe Biden, the conversation inevitably came to the elections, and his connections in the U.S. At that time, Joe Biden’s candidacy was not for certain yet. On the other hand, there are fraud investigations launched by the FBI against Jim Biden.
In the meantime, some names (from the business and political world) who had previously carried out “parallel diplomacy” (not via the Foreign Ministry channels) with the Trump administration on behalf of Erdoğan visited the U.S. for several times to contact Biden, whose candidacy became certain, against Trump, who has lost power due to the Covid-19 epidemic.
This first scenario is based on the possibility that those who want to undermine such contacts before they develop by leaking this video.
Among suspects for such an act is Brett McGurk, a member of the Biden team who has contacts with Kurdish groups as a former coordinator of the U.S. struggle against ISIL group, who is also known for his Turkey allergy.

The second scenario: Domestic and national

The second scenario, on the contrary, is about putting Biden in a difficult situation and forcing him to open contact by having him apologize to Erdoğan.
Accordingly, the video was leaked to Iraqi Kurdish journalist Zêrevan with an operation named “false flag” in the intelligence world, which basically means via channels that look unlinked to Turkey but under the knowledge of the  Erdoğan administration.
When the news was published in the NY Times at the end of January, attention was on the tension with Russia in Syria and the immigration problem with Greece. The file was set aside when it had no repercussions in the Turkish media. What is more, the Covid-19 epidemic broke out after that. The fact that the English desk of Turkey’s state-run Anadolu Agency published a comment on that video in May, shows that the issue did not drop from the agenda of the Directorate of Communications of the Turkish Presidency. However, after the team that went to the U.S. to contact Biden did not return with the desired outcome, the leak shows that Biden’s remarks have not been forgotten.
Foreign Minister Mevlüt Çavuşoğlu’s statement that Biden apologized to Erdoğan twice earlier (as Obama’s Vice President) is an element that strengthens this scenario. Biden had previously expressed his regret for misquoting  Erdogan in 2014 and for “not visiting Turkey earlier” after the coup attempt in 2016.

So, if the second scenario is true, the aim is to put Biden in a difficult position to force him to contact Erdoğan.
Of course, if Biden expressed his apology for this video, Erdoğan would be the person who brought the U.S. presidential candidate in line, but Biden would accordingly deny that he said “I support the opposition.” So the ruling party’s joy of “killing two birds with one stone” –both the U.S. and the opposition– might not be realistic.
What is more, the reactions from the opposition are based condemning Biden strongly, while also questioning why the government did not react to his remarks timely.
It also emerged from the very first hours that this issue was nothing new. Although it might have an impact on domestic politics, it is likely not to satisfy Beştepe. If these scandalous statements are to be used as a justification for the thesis that the government’s economic policy is completely correct, but unfortunately under a foreign attack, its impact might be limited to those whatever Erdogan says is the truth itself.
Let us emphasize two last points. First, the majority of the Turkish people still have not forgotten about Trump’s insulting letter that called on Erdoğan “Don’t be a tough guy. Don’t be a fool!” Second, urging Atatük’s followers to support Erdoğan in the face of such statements really fails to hide real intentions. Those who had learned about Atatürk from their parents as pre-school kids do not need these people’s lessons on the founding father of the country. 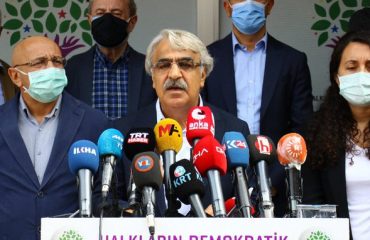 HDP detentions: Is party closure next? 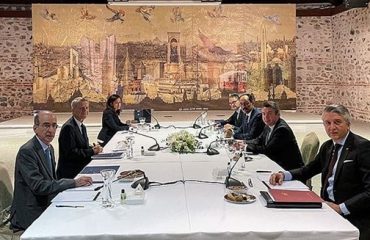 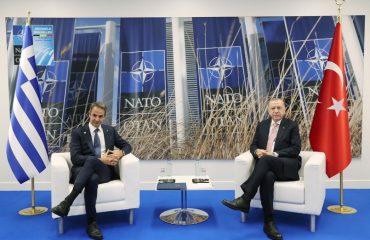 Turkey-Greece Aegean Crisis and its Implications on NATO