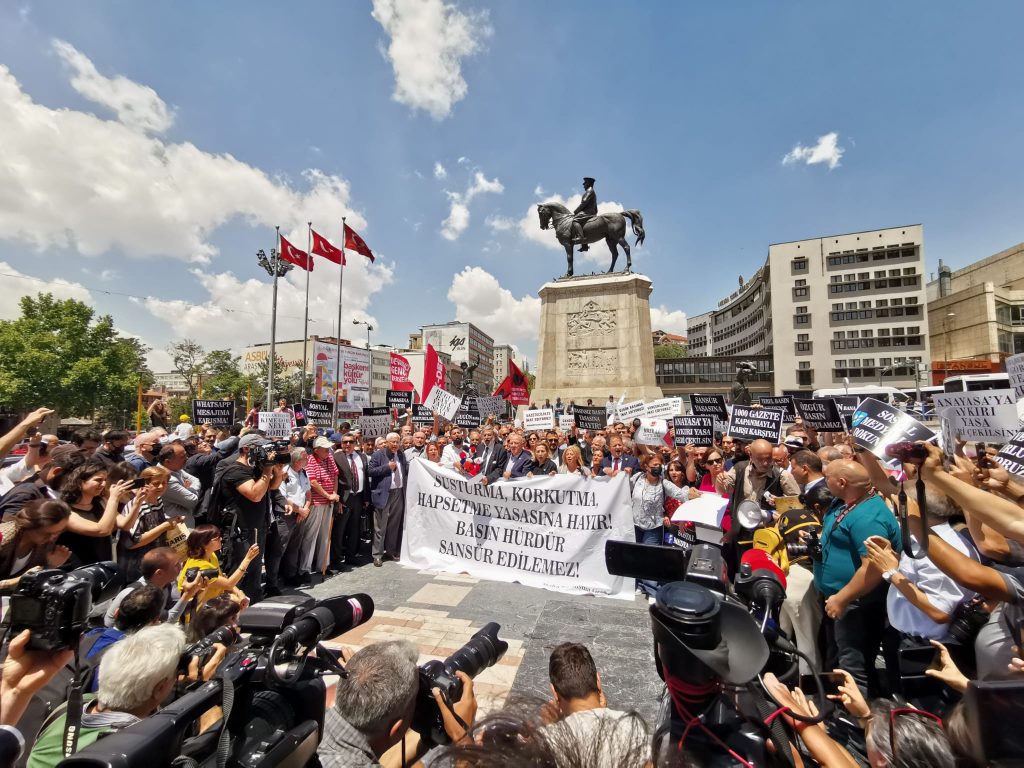 Above, you see 11 national-level journalism and press associations together at Ankara’s Ulus Square on June 22 making a statement to the press. It may seem like a regular demonstration to you, not meaning much. But it certainly does mean a lot to those who have some familiarity with the Turkish political scene, where the political polarization, ideological differences and even small personal disputes have a huge effect on solidarity between civil society actors. These 11 associations are manifesting unlikely solidarity in showing up at a square designated by the governorship at a time when even three people gather to protest something dispersed with a heavy police force.

The reason that brought them together is the new draft law that stipulates extensive regulations in the Press Law and the Civil Code. It was prepared by the ruling Justice and Development Party (AKP) and Nationalist Movement Party (MHP) and submitted to the parliamenton June 1. Journalists, social media experts, media workers, lawyers and the opposition reacted immediately. They argue that the regulations amount to criminalizing reporting and social media activities; further scrutinizing the social media companies like Twitter and Youtube; extending the legal possibilities to ban access to any internet content.

The unprecedented criminalization of the reporting under the name of “disinformation” brought all those associations which have been holding grudges against each other, reluctant to be seen side by side in fear of losing face, together. That’s why the picture means a lot for Turkey or Türkiye with its new name.

Any bill submitted to the parliament is first evaluated in the related commissions where representatives from all political parties and related authorities from civil society are present. In the commission of the bill, none of the organizations above was listened to. None of the criticisms that the opposition conveyed to the commission were taken into account. The AKP-MHP majority passed the 40-article bill with minor changes that keep the most contentious articles intact.

Journalists and opposition started to campaign against the bill before it was voted on in the General Assembly, which was scheduled to take place on June 22. That’s why journalists first wanted to go to the parliament to influence lawmakers. But governorship did not allow them to, they point to Ulus instead, a remote square for a public gathering in Ankara.

After the press statement, they started to wait for the voting but a piece of news came from the parliament: discussions were postponed.

Republican People’s Party (CHP) parliamentary group deputy leader Engin Özkoç said that upon the opposition’s requests the discussions were postponed for “a week so that the party groups can further discuss the law”. ”

The opposition and journalists were expecting the ruling block to pass it without hesitation before the election campaigns begin for the 2023 Presidential race.

Disinformation as a crime

The most contentious article of the bill is the one that includes a new crime in the penal code: “publicly disseminating misleading information”. According to this article “a person who publicly disseminates false information about the internal and external security, public order and general health of the country, in a way that is disturbing the public peace, with the sole motive of creating anxiety, fear or panic among the people, is sentenced to imprisonment from one year to three years.” In addition, if the perpetrator hides his true identity or commits the act within the framework of organizational activity, the penalty will be increased by half.

Lawyer Yaman Akdeniz, an IT Law expert and one of the founders of the Freedom of Expression Association, told YetkinReport on June 14 that this article will be another sanction in the long list of sanctions that will endanger the freedom of expression and freedom of the press. It will be used against dissidents and members of the press “as a new type of crime in the hands of prosecutors,” he said.

The vagueness of the definition of the crime and its scope also raises questions about its implementation. Reminding that the existing laws are already being interpreted arbitrarily under political pressure, Akdeniz said that “many investigations might be issued. Prosecutors may open investigations on their initiative. Primarily press organizations and dissidents using social media will be affected by this.”

Lawyer Kerem Altıparmak from the Freedom of Expression Association also stressed the alarming scope of the bill on his Twitter account on June 14.

“To give you an example, if the law is enacted, it might be a crime to say that inflation is 100 percent (click here for the full story of inflation debate). If you say that via your anonymous Twitter account, Twitter has to give your information to the prosecutors’ office,” Altıparmak wrote.

“If the prosecutor’s office decides that what you have written is not correct, and Twitter did not give the requested information to the office, the access to Twitter might be blocked within 4 hours,” he added.

What Altıparmak is talking about was the draft law’s addendum to the Law on Regulation of Broadcasts on the Internet which was enacted in 2007. The law regulates practices such as blocking access to websites and removing online content but it defines specific contents to enact that ban such as inciting suicide, sexual abuse of children etc and terror charges. It authorizes the courts and the Information Technologies Authority (BTK) to issue the ruling to block access or remove content only within this scope.

What journalists warn is that with the new vague definition of “disinformation” crime, the prosecutors and BTK can make decisions to block access to websites or online content more easily. It is not only limited to the disinformation act, the intelligence law also changed and disclosing information about intelligence officers is also defined as a crime. In addition, distinctions between domestic and international acts are also lifted. That only widens the scope of the contexts to issue blocks on access or remove content from the internet.

Social media platforms such as Twitter and Youtube already had a difficult decision in 2020 when another amendment in the law imposed a mandatory requirement for these platforms to have a representative in Turkey or face a reduction of the bandwidth up to 98 percent if they do not comply with the condition.

Akdeniz states that the platforms have not faced any sanctions so far, but the signals of change were given last summer.

“After the criticism from social media, especially after the forest fires, the signal was given that a regulation would be made again. Now we understand that if they do not fulfil their obligations in Turkey, they will face serious penalties,” he told YetkinReport.

With the new draft law, the social media platforms will be obliged “to report algorithms, to remove content, to share the information of content creators with the authorized law enforcement units” and will face additional administrative sanctions.

Akdeniz says that this will put pressure on social media platforms.

“User information regarding certain crimes stated in the penal code must be provided when requested. One of the biggest problems for authorities in Turkey was the inability to identify who the anonymous accounts belonged to or to get information about the accounts. Therefore, now if it is related to some crimes, including ‘disinformation’, it will put pressure on social media platforms.”

A blow to free speech before the elections

This situation may cause platforms such as Twitter and Youtube to “re-evaluate” their decisions to stay in Turkey in 2020, Yaman Akdeniz says.

“We will find out whether these platforms will comply with these conditions when these sanctions are passed by the parliament, but the situation here is not good for social media platforms,” he said.

These days when the 2023 elections are becoming an increasingly important agenda item, the enactment of such a bill will cause the freedom of expression and press to regress to another level in Turkey.

For this reason, Akdeniz thinks that the political side of the issue should not be overlooked:

“This law is a bill prepared by the government not to protect the rights of the citizens, but to protect itself.”