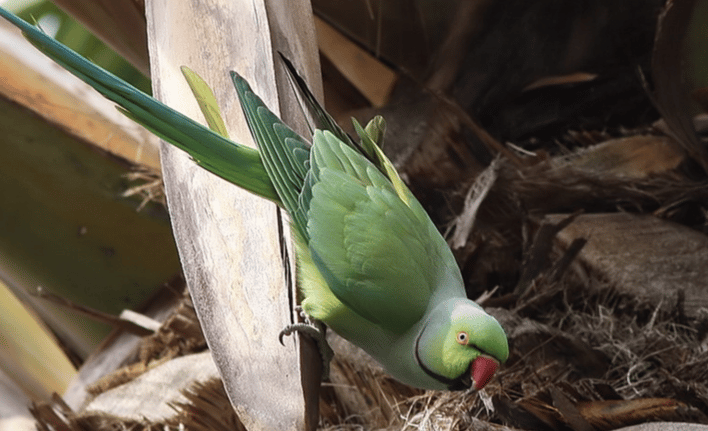 Last week, two parrot species living in our country were in Turkey’s agenda. Reducing the population of the Green Parrot, whose population size increased, came to the fore. This species was among those written to be invasive. So, are these parrots really invasive for our country? To be honest, as an ornithologist as well as an ecologist, even a scientist interested in biogeography, I could not give a clear answer to this question. But how I look at the situation, at least this is clear. Animal trade should be banned and long-term ecological studies should be supported and conducted on such questions.

One of the most important reasons driving the biodiversity crisis is invasive species. Invasive species are the organisms whose population size has increased excessively, thus starting to harm the environment. Most of the species identified in this way can have a neutral effect or be beneficial to the environment relative to other species. However, if a species is defined as an invasive species, it will cause ecological, environmental or economic damage by negatively affecting other species in its environment. As can be understood from this definition, the fact that a species is harmful gives it the title of “invasive”. And that’s one factor driving the growth of the biodiversity crisis today, says the WWF Living Planet Report.

So, what is the situation in our country?

When you ask this question, the first species that comes to mind are the Rose-ringed parakeet, which we know to breed in Turkey and which are common in big cities of Turkey. Parrots are among the exotic bird species, they mostly live in the tropics. However, due to the animal trade that led to the biodiversity crisis, it is now among the species observed outside the places where it should live. Sometimes, as a result of this trade, individuals who escape from the cages of breeders in the geographies they are brought to can naturally start to live. Something like that must have happened to the parrots in our country, because today we see these species widely in big cities of Turkey like Istanbul and Ankara. The population size is now over 10 thousand individuals and they are among the resident bird species of our country. What happened to them and they found themselves in Turkey, we do not know the exact reason for this. A very likely reason is that these species were transported by humans, which again draws attention to the animal trade. 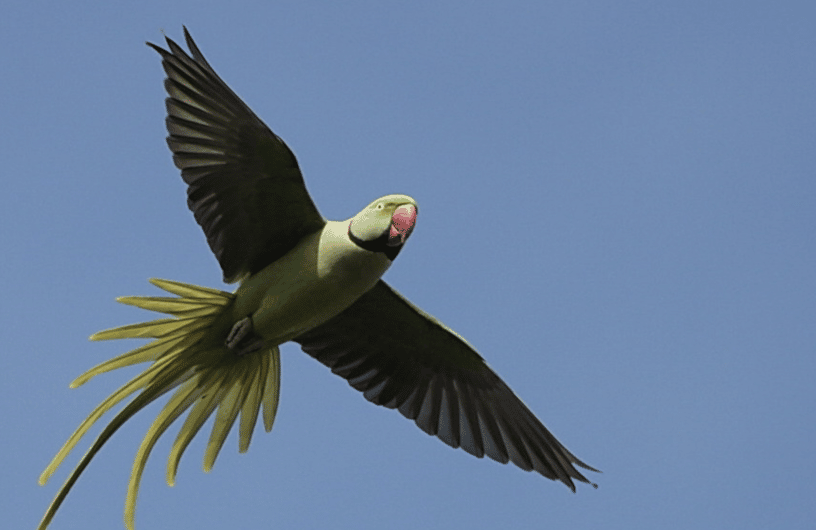 Psittacula eupatria – Alexandrine parakeet – photo by Prof. Dr. Mustafa Sözen, Location: İstanbul. The Alexandrine parakeet is distinguished by its larger beaks as well as having larger bodies than the Rose-ringed Parakeet. In addition, the beak of the Alexandrine parakeet , which has a pink neck ring, is completely red. According to the TRAKUS Birds of Turkey guide book, it is a bird species that has escaped from the cage and adapted to the natural life in our country. Although it is mentioned to be only in Istanbul, records from different cities have been reported.

Let’s get to know the parrots of Turkey

There are two types of parrots in our country, the “Rose-ringed parakeet”, which is widely spoken in the media today as to whether it is an invasive species or not, and which is widely seen in our big cities, and the “Alexandrine parakeet”, which is known to breed only in Istanbul. The Rose-ringed Parakeet is a bird native to some parts of Africa, and India. However, it also occurs in many geographies outside their natural range, and some of these populations are now considered natural in these countries. The populations of this species have also been reported in Mauritius, Seychelles, Hawaii, Hong Kong, Macau, Singapore, and apparently in the United States and Venezuela. The Alexandrine parakeet is a bird with natural distribution in India, Pakistan and Far East Asia; however, its distribution expanded as a result of its transportation to other countries due to factors such as animal trade in Germany, Belgium and the Netherlands in Europe; Turkey, Bahrain, United Arab Emirates and Iran in the Middle East; and in Japan in the Far East. It seems that both bird species have achieved a wide distribution area, apart from their natural distribution. The biggest reason for this, I repeat to say again and again, is their transportation for trading activity.

The history of parrots in Turkey

Green Parrots were first observed in Ankara in 1975 in Turkey. This species, which was reported as an extraordinary bird record in our country about 50 years ago, must have created great excitement for that period. During the past 50 years, we have never been evaluated as an invasive species in our country, at least we do not have concrete evidence based on long-term systematic observations. However, the Rose-ringed Parakeet is not a well-known bird species in Seychelles. Since it puts competitive pressure on another parrot species unique to this geography and causes the decline of this parrot species unique to the region, it gained the “invasive species” feature in Seychelles and became one of the species that are struggling to stop its reproduction. This species, which is considered an invasive species in England due to the damage it causes to agricultural products, is among the bird species that are also struggling in Israel due to its increasing populations. However, although the population size has increased in Turkey’s 50-year history, there has not been a scientific sensitivity to the species in the academic community. Our country has entered the bird species list as our native species. It is among the bird species that have started to appear more frequently in big cities such as Istanbul and Ankara in recent years, thus attracting attention.

There is a 40-year history in Turkey for the Alexandrine Parakeet. The first place they were observed in Istanbul is Gulhane Park. In addition, the best places to see this parrot in Istanbul today include Emirgan Grove, large and small Camlica hills, Florya Atatürk Forest, and wooded areas near the entrance of the Belgrad Forest. And without forgetting that whenever I go to Istanbul in 2021, I see both types of parrots in the park areas in the Fındıkzade district.

So, are parrots of Turkey an invasive species?

At the beginning of the article, I made the definition of invasive species. By that definition, the Green Parrot is an invasive species, no doubt about that. But I want to put a “but” here. When assessing whether a species is invasive or not on a global scale, a similar methodology should be applied at the local scale and caution should be exercised. Concrete, long-term data is needed to call a species that has lived in our geography for nearly 50 years an invasive species. For example, the Rose-ringed Parakeet is an invasive species in Seychelles, because it has exerted competitive pressure on another parrot species, one of the endemic species of the Seychelles fauna, and tangibly jeopardizes the existence of this species in the region. This has been published and clearly documented in long-term studies. Likewise, England defined the Rose-ringed Parakeet as an invasive species due to the damage it caused to agricultural products. A similar situation applies in Israel. These effects were reported within the framework of the scientific method, that is, by observing, formulating hypotheses, and testing hypotheses. In the light of these data, the Rose-ringed Parakeet is a bird species in the Global Invasive Species Database. Well, what about the situation in Turkey? As far as I know, there is no concrete evidence that I have seen, any scientific article published in Turkey so far for both bird species. This being the case, as I said at the beginning, I don’t know how accurate it is to consider a species that has not been reported to cause a negative ecological impact in Turkey as an invasive species and to take decisions on it “suddenly”. The importance of the subject goes far beyond attributing the adjective “suddenly” invasive to a species, we need long-term ecological studies in our country and we need to protect our biodiversity with action plans based on concrete scientific data. At least, banning the trade of this species and all other species included in the invasive species list in the world is one of the most important steps to be taken, and of course, long-term ecological studies must be taken into account. Decision makers need to consider this situation just before making a final consideration. In this period when we devalue many things, underestimating the importance of scientific thought and studies may cause us to make irreversible mistakes with the decisions we will make.

In a place like Turkey where ecological destruction is experienced at full speed, seeing parrot species in nature and being able to see them in city life is a situation that increases the biodiversity sensitivity of us who have fully adapted to city life.